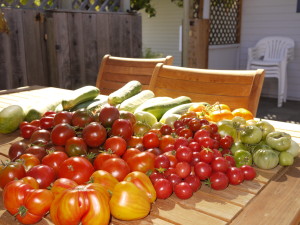 This picture doesn’t do it justice, but we’ve been getting almost equal volume cucumbers to tomatoes in every harvest this year.

Tomatoes are a gift that almost everyone appreciates.  They disappear like magic almost as soon as I start to complain that I don’t know what I’m going to do with them.

Cucumber, on the other hand?  Not so much.

This year, we’ve taken to conditioning gifts of tomatoes upon people taking cucumbers with them.

I’ve also researched cucumber recipes and tried to find more ways to use them.  I’m nowhere near the point where I need to be to take correct use of what my garden is producing.

I’ve seen this pattern in many of my start-ups.  They want to do X.  But it turns out, their business is used by others to do Y.  And now, they have to scramble to deal with the reality that is different than their plans.

Yet again, the garden is a great metaphor for start-ups.